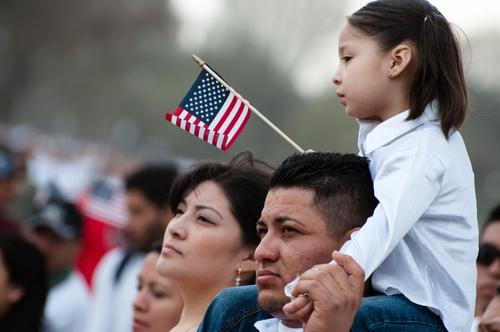 With over 44.5 million immigrants residing in the United States, we cannot overlook the link between immigration status and well-being. It is important to start by being clear that whether someone is considered a legal resident or citizen of the United States is due almost entirely to luck of time and place. Since the earliest U.S. naturalization policies, the immigration system has been a meandering maze formed by contradicting interests and political motivations. Depending on the climate of the times, people of the same nationality have been both prioritized and demonized over history. For example, in the late 1800s and early 1900s Chinese and other Asian immigrants were barred from entering the country; yet today, immigrants from Asian countries make up the largest proportion of new arrivals to the United States.

These shifting dynamics in immigration policies and processes, along with the public and political atmosphere, impact the health and well-being of immigrants and the broader population in a myriad of ways. In order to positively affect the health concerns that impact the immigrant population, it is critical to acknowledge the following:

Many immigrants (regardless of documentation status) experience challenges accessing primary and preventive health care – whether due to eligibility, affordability, or fear – which can result in detrimental impacts that ripple beyond the individual. For example, preliminary results from research exploring the effects of Immigration and Customs Enforcement activities, such as 287(g) and Secure Communities programs, suggest that these activities may be causing an uptick in low birth weight and premature births among immigrant and non-immigrant Latina mothers. Conversely, efforts to overcome barriers to receiving care have yielded substantial positive outcomes. For example, a pilot program in Oregon that expanded access to prenatal Medicaid services for undocumented women improved the quantity and quality of prenatal care and reduced rates of infant mortality and extremely low birth weight. It also resulted in an increase in well child visits and child vaccination rates; which benefits population health more broadly.

Many government safety net programs contribute to improved health outcomes. Medicaid and the Children’s Health Insurance Program are specifically designed for this purpose, but other social service programs like the Supplemental Nutrition Assistance Program (SNAP) have also been linked to better health. Undocumented immigrants are ineligible for most government services, but the cloud of stigma that too often surrounds the use of these benefits can dissuade even people who are eligible from accessing them. The recently proposed changes to the public charge rule, in which some of these essential services are singled out during the process of evaluating an immigrant’s application for a green card, exacerbates associated perceptions of shame and stigma, further driving away families in need, even those who are qualified.

There is well-established evidence supporting the links between stress and anxiety and longer-term physical health outcomes like cardiovascular disease, and immigrant families often experience higher levels of stress and anxiety. The fear of deportation is a constant source of stress and anxiety that is not isolated to undocumented immigrants – an estimated 16 million people live in mixed-status families in the U.S. New research into the health impacts of the Deferred Action for Childhood Arrivals (DACA) policy yielded compelling evidence about how protective policies can alleviate stress. One study demonstrated an impact not just for people who were direct recipients of DACA protection, but also for their children. The finding that children whose mothers were eligible for DACA had significantly better mental health outcomes than children whose mothers just missed the eligibility cutoff serves as a striking illustration of just how the effects of immigration policy can work their way into our biology and physiology, and then be passed on from parents to children – much in the way we pass on other inherited traits.

Immigrants are a vital part of the fabric of American society. They enhance the U.S. labor force, and even undocumented immigrants are estimated to contribute more than $11 billion in taxes. When immigrant communities can thrive in an environment that prioritizes their well-being, our nation’s cultural tapestry is enriched through music, art, and food from their home countries, expanding our global view and understanding of each other. Conversation about the impact is the first step, but how we understand and seek action to improve the policies, practices, and atmosphere surrounding immigration have the ability to undermine or bolster the health and well-being of immigrants and the broader population. When we foster an environment that is welcoming to immigrants, we are building a healthy future for everyone.

Dr. Hagan is responsible for the day-to-day operations of the Evidence for Action Program, including managing the proposal submission and review process, providing assistance to applicants and grantees, coordinating with the Robert Wood Johnson Foundation, and overseeing administrative and programmatic activities. Dr. Hagan received her PhD in Kinesiology from the University of Connecticut and her MBA from Seton Hall University.  She earned her B.S. in Nutrition and Fitness from the University of Missouri. She joined the staff at the Center for Health and Community at the University of California, San Francisco in 2015.

Over the course of her career, Dr. Hagan has worked across a variety of sectors including non-profit, academic, and public. She brings experience in social, economic, and health equity, cultural humility, public policy, business, and evaluation.  Prior to joining the National Program Office, Dr. Hagan was the Acting Director of Policy and Government Affairs for the San Francisco Public Utilities Commission. She also previously worked with PolicyLink – a national social and economic equity advocacy organization – where she served as the Technical Assistance Team Lead for the Robert Wood Johnson Foundation Center to Prevent Childhood Obesity, among other responsibilities.

Evidence for Action (E4A), a signature program of the Robert Wood Johnson Foundation (RWJF), takes a holistic view towards what constitutes health – represented by a wide range of physical, mental, and emotional outcomes. We fund research evaluating the health and well-being impacts of interventions – programs, policies, practices – with a particular focus on research that will help advance health equity.